Cuadra is part of the reclamation project for the former Macerata prisons: here is what has been done with the use of corten borders, ornamental railings and wall cladding panels.

Corten steel is the protagonist of the reclamation project for the courtyard of the former Macerata prisons in the Marche region. Cuadra, in collaboration with architects Francesco Ascenzi and Cristian Rocchi, who were responsible for the renovation, participated in the project with three types of products custom made for the new spaces indicated by the architects:

The project aims to enrich a building that lies in the historic centre of this city in the Marche region. The building has a historical value since it was firstly the seat of the Santa Chiara monastery (at the end of the 17 century) and then during Napoleon’s reign it was transformed by the architect Pietro Augustoni from Como, into a building that could host the city courthouse and prison.

The complex is made up of two buildings that are part of the Liberal Arts Department of the University of Macerata, separated by a courtyard surrounded by high walls. The north block is in Via Garibaldi while the south block is in Via Illuminati. 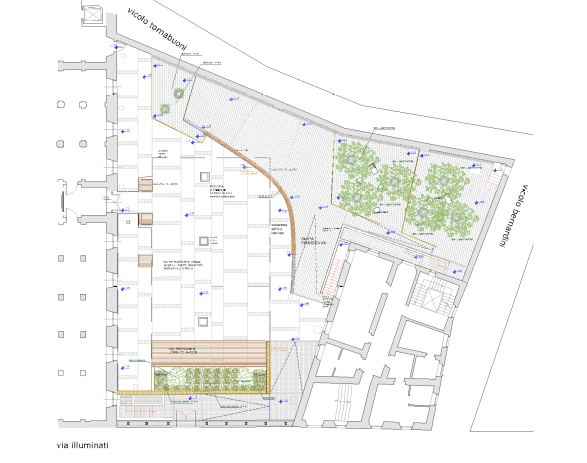 The renovation works planned for the project are aimed at the transformation of the historical courtyard of the building from an inaccessible space to a public area that the whole city can go to for cultural events.

The courtyard that separates the former male prison from the female one can ideally be divided into three spaces. To define each of these spaces the architects have chosen to use a different corten steel element.

The first space is the public entrance to the courtyard that is along the west perimeter wall. Once visitors pass through the gate at the entrance, they are welcomed by a great wall cladded with corten steel sheets.

On some of the sheets that make up the wall there are two logos printed on the metal. The first being the name chosen for this new space, which is also a homage to the hosted Liberal Arts faculty: “L’orto dei pensatori” (Thinker’s garden). The second being the logo and motto of the University of Macerata.

Once visitors have entered this space they will find themselves in a large courtyard whose natural structure is developed on different altimetric levels.

In order to do this, the architects chose to use a series of corten borders to define the two areas at different levels. The first coincides with the level of the University library while the second corresponds to the contact area between the ground and the south-east part of the perimeter wall.  The corten borders are designed to create geometries on the ground that can ideally be used as “path delimiters”. That’s why the corten flowerbed borders have been used here to highlight the steps and follow the movement. 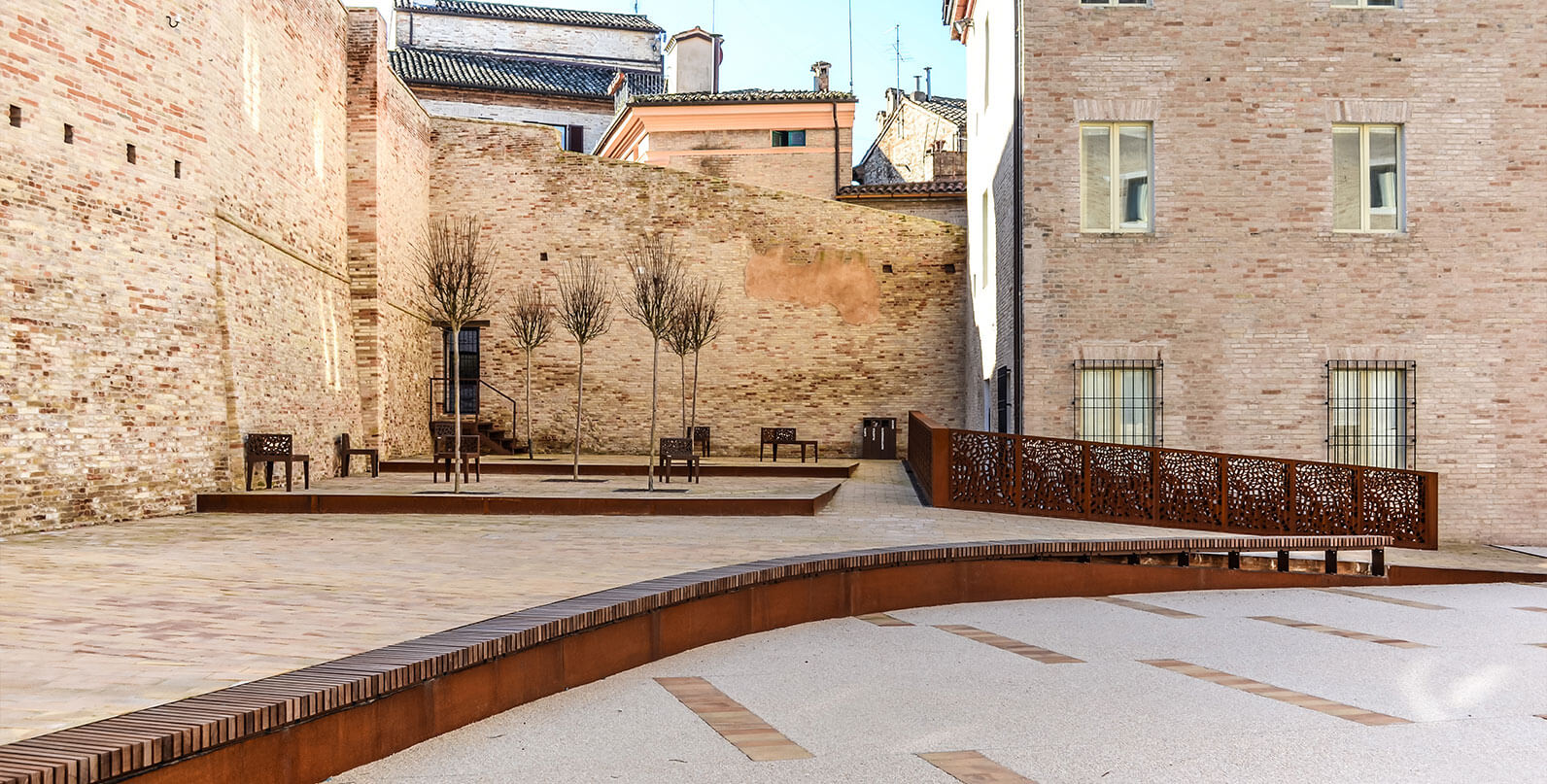 The corten profiles also highlight the play on altimetry of the courtyard; a play that is also found in the use of two different material textures: the “handmade” brick paving for the raised part and the strip adjacent to the façade of the former male prison building, and the washed gravel paving with brick inserts in the lower part. Lastly, the raised area is also defined by the addition of a series of trees and some movable seats.

The use of corten steel borders is therefore to aesthetically delineate the project’s configuration.  The courtyard will host cultural events (theatrical performances, concerts, cinema, etc.) and the renovation works are designed to enable the use of the raised part as a stage whose scenic background is the east perimeter wall.

The passage between the raised part and the “ground zero level” of the square, is through a ramp delimited by a laser engraved steel railing based on a drawing made by the architects who were responsible for the project.

The whole courtyard has artificial night lighting that emphasises the monumental and historical character of the perimeter wall and of the buildings.

The corten creations made by Cuadra for this project to renew the building, have been designed and conceived in close collaboration with architects Francesco Ascenzi and Cristian Rocchi. The aim was to create an aesthetic-social space for the repossession of a central area of the historical fabric of the city of Macerata. 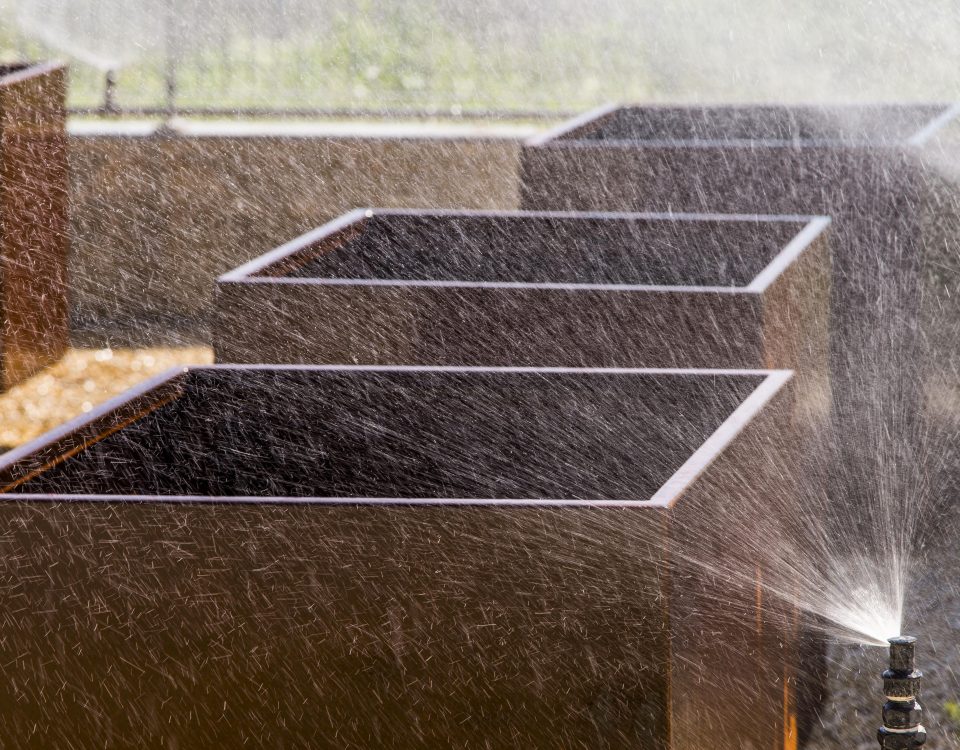